It was in early 2015 that I found out that you can use lovely old lenses with Canon DSLR's. A lot of research and useful resources such as the Pentax forum and MFlenses soon got me looking at Asahi Takumars. I plumped for the classic Super Multi Coated 50mm f1.4. It soon started a spree of scouring eBay for bargains. Along the way I dabbled with old Canon FD mounts and Carl Zeiss DDR's, 6x7 Takumars and Yashicas. At the end of the day it boiled down to a collection of pretty much every model of Takumars below 150mm all in the Super Multi Coated or S-M-C range. Not to be confused with the SMC range which is a much later rehashed range which some say are of poorer quality, I've never tried one. They are all in the M42 mount and all have a Auto / Manual switch which is very handy for stop down metering. The only exceptions in my collection are a Yashica 100DX Medical macro and a couple of Zenit Photosnipers.

You will end up with quite a lot of these left over! 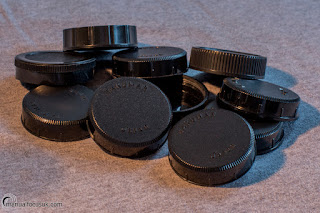 
So here is a brief description of each of the lenses that I actually use plus a few just for fun and non lens stuff in 'Odds and Sods'. There are lots of resources, as listed above, for in depth technical reviews so I'll mostly concentrate on the practical results and use of the things.

As for the camera I use a Canon 6D with a very simple M42 to EOS adapter. The great thing about the relationship between Canon EOS cameras and M42 mount lenses is the flange focal distance which is almost the same. The M42 being a little longer by 1.5mm. This means that the 1.5mm thick adapter corrects the distance to the Canons. Unfortunately the old Canon FD lenses have a distance shorter than the modern EOS EF mount meaning you need a lens in the adapter to compensate. Not something that does the image quality any good. There are ways round it but that's not for here.

I'm finding the Canon 6D a perfect tool to make the best use of old lenses. Firstly its a full frame allowing the lenses to be used as they were intended in full 35mm goodness. Nice having the numbers on the lens actually meaning what they say. Of course full frame doesn't come cheap and while the 6D isn't a bargain basement job its still about half the price of a 5D MkIII with which it shares the important stuff like sensor and processor. The important stuff to take a picture. What you loose is the fancy auto-focus, the 6D gets a pretty basic affair however since this camera will never have a lens with auto-focus on it I couldn't care less! One modification was to swap the focus screen from the stock, auto-focus friendly one, to the EG-S more suited to manual focus. It is a touch darker and to be honest I haven't seen too much of a difference. I've since changed it again to an old fashioned Fresnel one made by www.focusingscreen.com with the 2/3rd lines. It's a very well made screen indeed. Don't be put off by the iffy English on the site they know what their doing. Took a week to arrive but fits nicely and works a treat. It takes a little jigging to get it to fit just right but once in it's a nice match. Makes manual focusing a dream now. 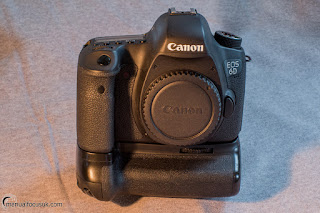 There have been issues with both the Canon 5D and 6D mirrors and M42 lenses. The lenses can sit quite far back into the body and can catch on the mirror as it flips up. When I get each of my lenses I give them a try to see if they catch. A few do, the 50mm's in particular. But when I use them for real I haven't had one catch on me. I'm not worried.
You'll notice a battery grip on the 6D I find them far more ergonomic than without. I need somewhere to put my little finger. I'm not trying to look like 1DX or have OCD about battery life. OK so it might be true about the OCD!

I have set the camera up and saved to C1 preset in the following way:

- AV - Other than full Manual you can't use any other setting.
- M FOCUS - Manual focus - this comes up automatically and you can't change it for obvious reasons.
- Single Shot - this isn't the EFRS!
- AWB - You can always change in Lightroom
- Exposure compensation to the right by 1/3rd
- Evaluative Metering - I have experimented with spot etc but find this the best. I use the *AE Lock button and have set the AF-ON button to lock/unlock the Metering. Can be handy.
- Auto ISO - This is set to a maximum of 1600. I find this is just about right and always gives good results. Any higher and you really shouldn't be taking a picture without flash. I don't use flash!
- Picture style and other settings - Everything I can I set to zero or off. I have Lightroom for that sort of thing.
f00 - As explained above the camera will use the light as is and isn't a fault.

I usually utilise the Manual / Auto switch on the Takumars. This is handy for focusing. Set your fstop in the MAN position then flick it over to AUTO and the aperture will open fully. You can now focus accurately with lots of light and narrow DOF. Flick it back to MAN an your good to shoot.

I went through quite a learning process with the adapters. I first splashed out on all singing all dancing programmable chipped ones which fool the camera into thinking it has an EF EOS lens on it. That's all very well however there are drawbacks. For example you program the chip to 100mm f4 that's fine but if you change the actual fstop on the lens then the camera doesn't change. You have to compensate since the camera is reading the light fully open (at f4) then calculates what it will be when the aperture is closed for the fraction of a second to take the picture. Which doesn't work if you change the fstop on the lens since the chip doesn't change so the camera thinks its still at f4!!
Canon cameras have a very handy trick up their sleeve. If it detects a non EF EOS lens, i.e. a lens that does not have any chip or electronics such as one of our M42 lenses it will show '00' in the window where there should be an fstop number. This means it will read the light that it actually sees and doesn't compensate. It can't anyway since it doesn't have a number to play with! This then means you don't have to worry about compensating. This sums up what I'm learning with manual lenses. It's best to just keep it simple. The less there is an electronic interface then the less there is you have to fight. So I finally invested in a bunch of non chipped adapters. Another advantage? They are less than half the price of the chipped ones. 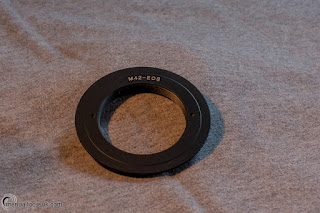 As well as no chip I also managed to find ones with no internal flange. The more common ones have a smaller hole meaning that they have a flange which covers a pin on the back of most M42 lenses that activate the Auto function. Most of my Takumars have a lever which protrudes out the back and catches on that flange. The ones I have have no flange so no catching. Again these are the less desirable ones and so cheaper again.
Finally you have to use the camera on either AV or MANUAL setting since the camera cannot change the fstop.

A quick note about Lightroom. There are a number of principals that I adhere to when taking and processing pictures. I'm not a fan of over processing. Lightroom should be used to develop a picture and no more. I very rarely use the Spot Removal Tool only if I really have to. The rest is pure level modification to get it just right. Colours are played with only in black and white. Its the equivalent of your old red, green, orange etc filters. For the rest you can't do much about a badly composed, out of focus, flat picture either take it again correctly or come back when the light is better. That's what photography is about. HDR is a dirty word for me. Horrid things! If, of course, you want to use Lightroom or Photoshop to make a 'Photoshopped' picture that's an art form in itself then fill your boots just don't try and polish a turd they don't look nice!

Keep watching this space as I'm usually in the throws of hunting down another lens. Well you always NEED another don't you!!